“All of humanity’s problems stem from man’s inability to sit quietly in a room alone.” – Blaise Pascal

Hola folks…I believe I left you back in 2005, when there was excitement in the air due to the imminent short story competition being run by the Cultural Department of the Ayuntamienta (Town Hall) There was a natural, keen interest among members of our Torrevieja Writing group to enter and everyone was busy scribbling away like mad, me included. Being fairly new to the town, compared to several others, I needed to do more research, which is something I always enjoy, so set to reading up on its history.

I soon discovered that Torrevieja and environs was home to a valuable substance, once known as “white gold,” now a common or garden product – sal (salt!). Roman soldiers in the area way back were paid salt in lieu of wages it was so precious, and put the town and countless acres firmly on the map of the world. In fact, Torrevieja was such a tiny pueblo, it depended on the product for its economic survival. The famous salt lagoons of La Mata and Torrevieja are now designated as National Parks and are home to a huge variety of bird species, with over 200 sighted on the lakes.

Delving further back into history, I was fascinated to learn that via 15th C Roman Chronicles – in fact – local salt funded the travels of Christopher Columbus! As it also preserved fish, salt was found to be invaluable when travelling long distances, and who could eat a boiled egg without it! 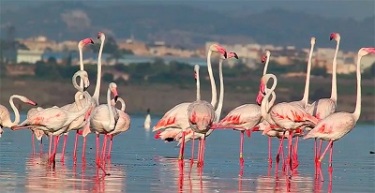 Meanwhile, just how was I going to handle writing a riveting story about such a place?! I’d already written a few, modest tales but never entered one in a competition before…Umm. An idea then struck which sounded a reasonable ‘peg’ on which to hang my story. I’d become a TIME TRAVELLER. I knew nada about such a mode of travel (Who does… ), but what the heck, I’d give it a go and it worked out a treat. I mentally travelled backwards and forwards at will, incorporating actual history, linking it neatly to fiction. Of course annoying doubts gathered along the way; they often do. But at least/last it was finished and the dreaded judging time arrived. The Palacio de la Musica was packed, fingers were nearly nibbled to the elbows, etc., and I thought I heard my name called out. It was! Wow and eek… I’d won first prize. Being something of an introvert when it comes to crowds and public speaking, AND being interviewed in Spanish, twice, was a bit disconcerting, while sweetened by a generous cheque and a most friendly reception. The international competition was held for two further years, when I was one of the judges, which was great fun and a privilege.

Before moving on, I’ll just share a few excerpts from my story:

“…Spain – after much barbarism (via) the Phoenicians, Greeks, Carthaginians and Romans – finally emerges as the most advanced of the provinces under the Romans. I became a Time Traveller before the Visigothic Kings succeeded Rome’s domination and witnessed too many tragedies… and did much century hopping when the Vandals were around…”

“Spain attained her most triumphant success – that of expelling the Moors at the end of the 15th century. Although bloodthirsty, that period was exciting and the Moors left behind an admirable legacy of wonderful architecture, intricate wood carvings, (and) exquisite textile designs…”

“Men seem to have a penchant for war but, although the colour red dominates time, I choose to look to the sky.”

“It is March 2lst, 1829 – the beginning of the Spring equinox. Earlier, the sky was calm, the atmosphere clear. Around lunch-time, there is a slight tremor and I again feel a great sense of foreboding, for there have been over 70 worrying days and nights of seismic activity in the area of late. Suddenly, the wind drops, the sky becomes overcast, and there is an uneasy calm over all. My palms are damp; my throat dry. I do not want to re-experience the inevitable … I am fearful as the earth begins to tremble and, inside Carlos’s villa, plates fall and smash on the filed floor. Then, a huge tremor wreaks havoc where it strikes: in Torrevieja and all the towns and villages in the Vega Baja. In a little over five seconds, 32 people perish, along with 36 animals and 67 people are injured. As in many other households, tragedy descends on the Rodriguez family, for Carlos’s wife Maria is making paella in the kitchen when the roof collapses on her. Fortunately, Carlos is out in the open with his two sons. All three survive. Uncle Jose – now a bent, old gentleman – is still asleep when the earthquake strikes; a sleep from which he will never awake. I am again overcome with sadness as Maria was so full of life. The reconstruction of the decimated town is ordered by King Fernando VII.”

Torrevieja slowly grew into a town buzzing with activity and industry and 250 ships were built in sight of the Casino. Two of the ships became famous in later TV and films: one in ‘The Onedin Line’ the other ‘Treasure Island.’

Today, it is a modern-leaning, fascinating and cosmopolitan town of 100,000 people, with beckoning, clean beaches and green parks aplenty, eager to cater to the curious traveller.

Adios until next time.