“Winter is on my head, but eternal spring is in my heart…”
Victor Hugo

Fascinated by the customs of other countries, I was involved in some research recently and discovered several odd facts about Christmas. Unless you happen to be Italian, did you know, for instance, that in Italy an “old woman” named Befana delivers presents on the night of January 5th and even “goes down chimneys!” I bet all the octogenarians are queuing up, poor dears…

In Iceland, the Jólakötturinn (the Yule Cat) dominates the scene. Good children are given new clothes, but woe betide the bad ones, as they are eaten by gigantic felines. Oh dear! 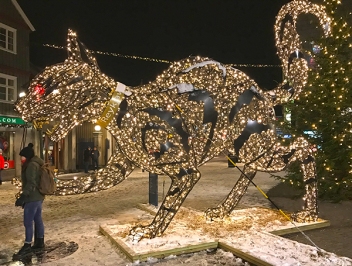 In Spain, things are much more to everyone’s liking, especially the sometimes naughty children…
Being a mainly Catholic country, religious Spanish attend Midnight Mass on Christmas Eve – also known as the “Mass of the Rooster” – as one was said to crow when Jesus was born, while the non-religious celebrate it in a traditional manner without the religious connection. Parks, and other green areas, are planted with hundreds of glowing Poinsettias, and outside many town halls and churches, creative “Beléns” are erected. A Belén is usually a religious scene, or a ‘cameo’ showing how people lived at the time of Christ’s birth. Some are beautifully constructed and lit, and often different villages and towns compete. They are also evident in many shop widows.

Christmas Eve sees most revellers partaking of generous feasts of festive fare when family and friends get together, continuing on the 25th… The streets and houses are decorated- often in lavish fashion – with festooned trees, coloured lights and bright decorations, as in many parts of the world. And, I can assure you, the Spanish know how to welcome and party!! Can you feel a BUT coming? For it doesn’t end on Boxing Day… Oh no! Apart from New Year’s Eve celebrations to welcome in the New Year (Wowie…) when the magical 5th of January arrives, children in particular get very excited, for it is the night of the Three Kings. And anyone who has seen the extravagant, colourful, procession of the beautifully dressed figures, will always 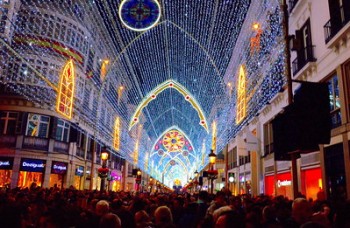 remember it! I certainly will. We saw ours on the 5th night of the new century 2000, snuggled in our warm coats against the cold, and ducking to escape the showers of sweets being generously thrown to the children from the elaborate floats passing by. As custom decrees, most children put their shoes outside their bedroom doors which are magically filled with small gifts in the night. (Glasses of cognac, a Satsuma and walnuts are left for each King.) Then more festive food on the 6th! In the Basque country of Spain, gifts are distributed by a ‘magical man’ called Olentzero, and in Catalonia country, gifts are left in or near a hollow log in the image of a ‘funny man.‘

Heralding in a new century, the lavish firework display was another memory for the diary. It was the most extravagant I had seen since the end of World War 2…Oddly enough, nevertheless, the New Year’s eve of 2001 beat it hollow.

Living in a new country in the midst of people of many nationalities, was a newish and heady experience and no less than fifty people of our acquaintance – from two urbanizations – got together and booked tables at an excellent fish restaurant in Torrevieja. You could have cut the ambience and electric atmosphere with a knife! The fact that my middle brother and his dear wife were present, plus a Scottish couple who had a holiday home near us, was also of significance. My brother had brought some ‘flying balloons’ over and the poor waiters – so good-humoured – had the devil of a time serving our food while being ‘attacked.’ The Scots: Katrine and Gordon, were more than ‘up for it,’ and Gordon, in particular, was the life and soul of the party. Possessing an infectious humour and warm personality, he was ‘flavour of the month.’ He later … wearing a red wig and Scottish hat, sang us ballads and strummed his guitar until the wee hours. We all remained good friends…

The rest of that January seemed very quiet…until a Dutch couple moved in nearby. While they behaved impeccably and were very pleasant, we noticed pungent odours drifting from their casa and, in fact, the wife of our President – who had stayed chatting to them too long – admitted she felt ‘squiffy’ when she arrived home…The Dutch couple had a romantic story to tell – told to yours truly – in that ‘he’ who had been in the British Navy, wrote his name and phone number on a slip of paper, sealed it in a bottle and threw it overboard (fortunately still at sea). It bobbed gaily along in the ocean, until it was washed up on a Dutch beach weeks later. A young lady, out walking, picked it up, read the contents and phoned ‘said guy.’ Footloose and fancy-free, he travelled to Holland and claimed the maiden as his own. You couldn’t make it up! They duly married, had children, and lived near us for several years.

Meanwhile, there was a Boules match to organize – on cleared waste ground nearby – planted and treed with seats and suitable pitch – and a holiday in the UK to arrange.

Before I wish you Adios, I must admit to a weakness for good quotations, and noted a few worth quoting, by no less a person than Miguel de Cervantes Saavedra, author of the acclaimed “Don Quixote.” He said: “Wit and humour do not reside in slow minds.” Comforting words. And another I’m fond of “When life itself seems lunatic, who knows where madness lies? Perhaps to be too practical is madness. To surrender dreams – this may be madness. Too much sanity may be madness, but maddest of all, is to see life as it is, and not as it should be.”

Wishing everyone a healthy Christmas, with no socks… (well, not under the tree) lots of noshy things to eat, maybe a few gifts AND an abundance of peace, fun and love.

Important PS I would like to express my heart-felt appreciation for the inspiration and assistance freely given by so many writers on the internet. You are stars in the earthly firmament. X