Obviously, in times of wars, epidemics and catastrophes – after the first shock waves subside – it is human nature to do one of many things… Tighten your belts and do whatever needs to be done in the given circumstances; hole up in any available safe place; have a nervous breakdown; or take a very deep breath and pick up a book/check the local cinema…I’m not being facetious here!

As a child in WWII, in between evacuation, separation: Dad in the Royal Air Force, Mum working in an ammunition factory, whenever there was the slightest opportunity… Mum and I would sidle off to the cinema to escape the realities of the dangerous world we found ourselves locked in. Who knew that an evil lunatic – seen in newsreels ranting and raving his dangerous rhetoric- would prove to be the death of countless millions of souls around the globe. And what a life lesson it was to me to learn just how adaptable, ingenious, courageous and usually kind, people really were, although I couldn’t fully evaluate or appreciate it then.

What a balm books and films were then. The siren could wail and cause disquiet and concern , but – at first – us children could never imagine what the adults could foresee. Whether one stayed in or went out, it was like playing Russian Roulette, so a trip to that dark cavern where the silver screen would totally change our world for a few, delicious hours, was a huge treat. 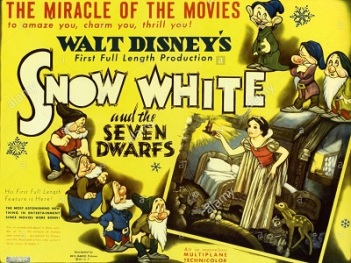 I was hooked by ‘the Pictures’ from the mind-boggling time I saw my first film: Walt Disney’s “Snow White.” Like countless other children, I fell in love with the seven dwarves and Snow White, and had nightmares courtesy the witch. The film was released just before the war started. And who could resist the childish charms of the charismatic Shirley Temple pictures, or the quirky, endearing Charlie Chaplin and clever, dead-pan antics of Buster Keaton?

Once in Wales, dear Aunt Sal held my hand as singer Nelsen Eddy sang “I’ll See You –again…” to Jeanette McDonald from the clouds, having been tragically killed, and I thought my heart would break in two…But, if I could pick two films which had my emotions more firmly in their grip, they would be Charlotte Bronte’s “Jane Eyre” and “All Quiet on the Western Front.” The latter – being an anti-war film – was so moving; the end so devastating…it deeply affected me. The book “Jane Eyre” on the other hand, affected me even more than the film. I read it aged 13 just after I met my best friend Sheila (Slim) Devo, an enigmatic, elfin-like girl with a huge personality. In the book, Jane’s friend died in the dreadful school they attended and – with my hormones all over the place – I imagined losing my new friend, and it floored me.

As for books, there are far too many to mention, but one which seems to link in with the present pandemic had a profound affect on me. It was Charles Dickens “A Tale of Two Cities.” It started:

Such an insightful piece of writing. Set in London and Paris in1859 during the French Revolution, a French doctor Alexandre Manette, having served an 18 year imprisonment, is released and goes to live in London with the daughter, Lucie, he has never met. The story is dark and complicated. They find themselves back in Paris. There are two men in love with Lucie and she marries Charles Damay, a French émigré, who is tried for treason against the British Crown; eventually found guilty and sentenced to be guillotined. Lucie’s other suitor, Sydney Carton, bears a striking resemblance to Damay, while an evil, blood-lust character called Madam Defarge is shot while up to skulduggery. In the mean-time, the selfless hero of the day, Sydney Carton, drugs Damay in the prison and changes places with him. Before he ‘goes bravely to the chop’ he states: “It is a far, far better thing that I do, than I have ever done. It is a far better rest that I go to than I have ever known.” Forgive me for revealing the denouement. It left me a helpless, sodden mess… I do seem to enjoy a good cry!!

What about YOU? What films/books left you emotionally drained?