Not long released from the dreary clutches of the war; ears no longer tuned into the air-raid siren or a suspect aeroplane – what bliss! And, as a carefree teenager, what joy it was to be able to wear ‘the new look’ with peplum-waisted two-pieces and pretty dresses with voluminous skirts and petticoats after the utilitarian years just past… Apart from sweets and chocolates still being rationed, we could now treat our taste buds with, much-missed, oranges and bananas, despite the odd queue. Fortunately, books hadn’t been rationed, and I owned a copy of a much-treasured “Jane Eyre” and had an up-to-date issue of a newly-published American magazine import about the latest “True Crimes” in the United States, which I always relished.

I had long-since joined the Youth Club where I jitter-bugged with vigour and enthusiasm to a record player, but was fast-being lured by more sophisticated haunts such as The Hammersmith Palais, the local Ilford Palais and The Lyceum in London, with its wonderful, bouncy dance-floor. I was in heaven! My best friend, Sheila – ‘Slim’ – Devo, “held court” in college, as she had such a magnetic personality, and we bopped wherever there was music, had pretty dresses run up by a cheap dressmaker and, at one time, both worked for Associated British Cinemas in Golden Square. (I left their employ after my mature boss tried doing unspeakable things to me in the broom cupboard.) She stayed on awhile and became a successful career girl, working for several notable personalities, including Jack Hylton. A few years later, we joined an East End Amateur Dramatic Society and appeared in “Oklahoma” staged at The People’s Palace in Mile End. Being a good actress with an excellent stage voice, Slim played a leading role, while I ably cavorted on stage with the other dancers, not daring to project my questionable singing on the audience…

One day I played truant (the one and only time. Honest) and didn’t heed the warning of a classmate at college:

“You’re not going to the pictures with Jeremy Howard, are you? He’s got a terrible reputation…” I should have listened… (The picture had only just started and, within minutes, he had undone the buttons on my sweater…) I recall saying, cheeks flaming…“You heel!” before flouncing out of the cinema with a few hours to play with! The trouble was, although I liked boys a lot, I was shy and blushed crimson. Being a teenager had its problems…” The times”were very different then and you quickly gained the label of a Jezebel if you were liberal with your favours. Catholicism added to the guilt complex; something I resolved in later years. Fortunately, there seemed to be a fair percentage of young “gentlemen” around and I met some really nice boys (guys was used much later). That’s not to say a whole lot of smooching didn’t occur… But dancing was my passion and I certainly did my share. I loved ballroom, and at one stage, met a pleasant lad who asked me to train seriously but, for one reason or another, it didn’t come to fruition. 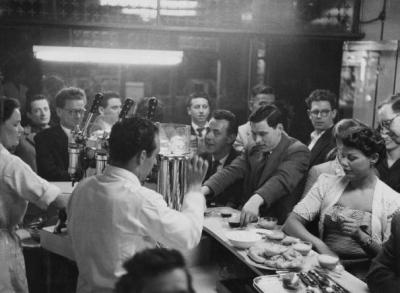 The generally more buoyant atmosphere of the 50’s, was enhanced by the really fabulous music around at the time. American-style coffee bars and cafes were opening in London, and we were truly spoiled by the Big Band sounds from Glen Miller, Tommy Dorsey, and Harry James records, and musicians like Count Bassie, Louis Armstrong, and Duke Ellington. And then there were the singers who could REALLY sing, or rather croon, such as Sinatra, Perry Como, Bing Crosby, Howard Keel, Ella Fitzgerald and Sarah Vaughan—swoon… The list is as long as my arm.

It was only three years since I had visited Merville in France where my father was housed in the first part of the war as an airman. He had befriended an attractive woman called Clemence who sent us a few food parcels, and ran a café there. I had crossed the channel for the first time, aged fifteen with my Godmother Aunt Doris. We had a rough ride in a taxi from the station over roads unfit to drive on and passed fields still littered with war debris. Entrails of various planes and craters were still evident, and the café Clemence ran was opposite a rocket-launching pad facing the UK. She said she prayed every time she heard one going up. I was treated like a VIP when we arrived. “Oh, Sharlie’s daughter….” She exclaimed several times, shaking her head. Methought she was very fond of Dad! I was prodded and well-fed as she tutted “Too thin…” and had my first glass of wine with dinner! We visited Lille by train to shop at their market; and cycled to the local churchyard to look for poor 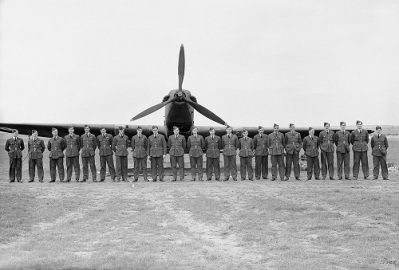 Uncle Bernard’s grave. He was Aunt Doris’s youngest brother, aged 22, and had been a navigator in the Royal Air Force. For some strange reason, she thought he might be buried there, but had been stationed many miles away. His body was never found. It was later thought he went down in the channel in his plane, poor man. I recall shedding several tears at sight of so many memorial “Angels” to youngsters near my age.

One evening, I was taken by my Aunt to the village hall, which also featured as a cinema. What an eye opener…Youngsters of both sex, seeming sophisticated beyond their ages, nonchalantly smoked, and one blonde French lad made quite a fuss of me and changed places with a friend so he could sit beside me. Aunt Doris was chatting to the person next to her in stuttered French, so didn’t notice “Paul’s” interest. The lights dimmed and the film played out, with Paul nudging closer and flirting like mad. When the lights came on and Aunt Doris noticed Paul’s interest, she whisked me away. But not before he said “I will write cherie… Clemence will give me your address,” and kissed me on one cheek.

Armed with a freshly killed and plucked goose for “Dear Sharlie and Lila,” we left a tearful Clemence for home. True to his word, Paul wrote, and Aunt Doris helped me translate, but by the third letter, he was getting carried away and she became shocked by his ardour. She then received a letter from Clemence telling me not to reply to his letters as he had stolen some of his grandmother’s savings to cross the channel and visit me. I should have been shocked, but instead was rather flattered to be wooed like a heroine in a French novel.

And so, I left Pitman’s college at fifteen to work in a series of offices in the City and West End of London. I was buzzing! I can’t emphasize enough just how wonderful it was to see all the lights aglow and the shops stuffed with such an array of tempting goodies after being, often, boarded up or near-empty for over five years. And it was such a joyful time that, as a family, we were all together again.